Crooked teeth give many people sleepless nights. If you are one of these people and dream about a beautiful, Hollywood-like smile, you should definitely visit our practice.

What does orthodontics do?

Orthodontics is a field of dentistry that deals with correction of malposition of teeth and jaws. It is much harder to clean teeth that are crowded or crooked. Thus, such teeth are more susceptible to caries. Additionally, malocclusion also results in improper muscle strain which entails other consequences, such as headaches, neck, shoulder and even back pain. It is mainly aesthetic considerations which prompt most patients to visit an orthodontist. Orthodontic treatment also increases the probability to retain healthy teeth for the rest of one's life. If you want to know whether you require such treatment, there is only one way to find out - see a dentist, preferably a specialist in the field of orthodontics.

When to visit an orthodontist? 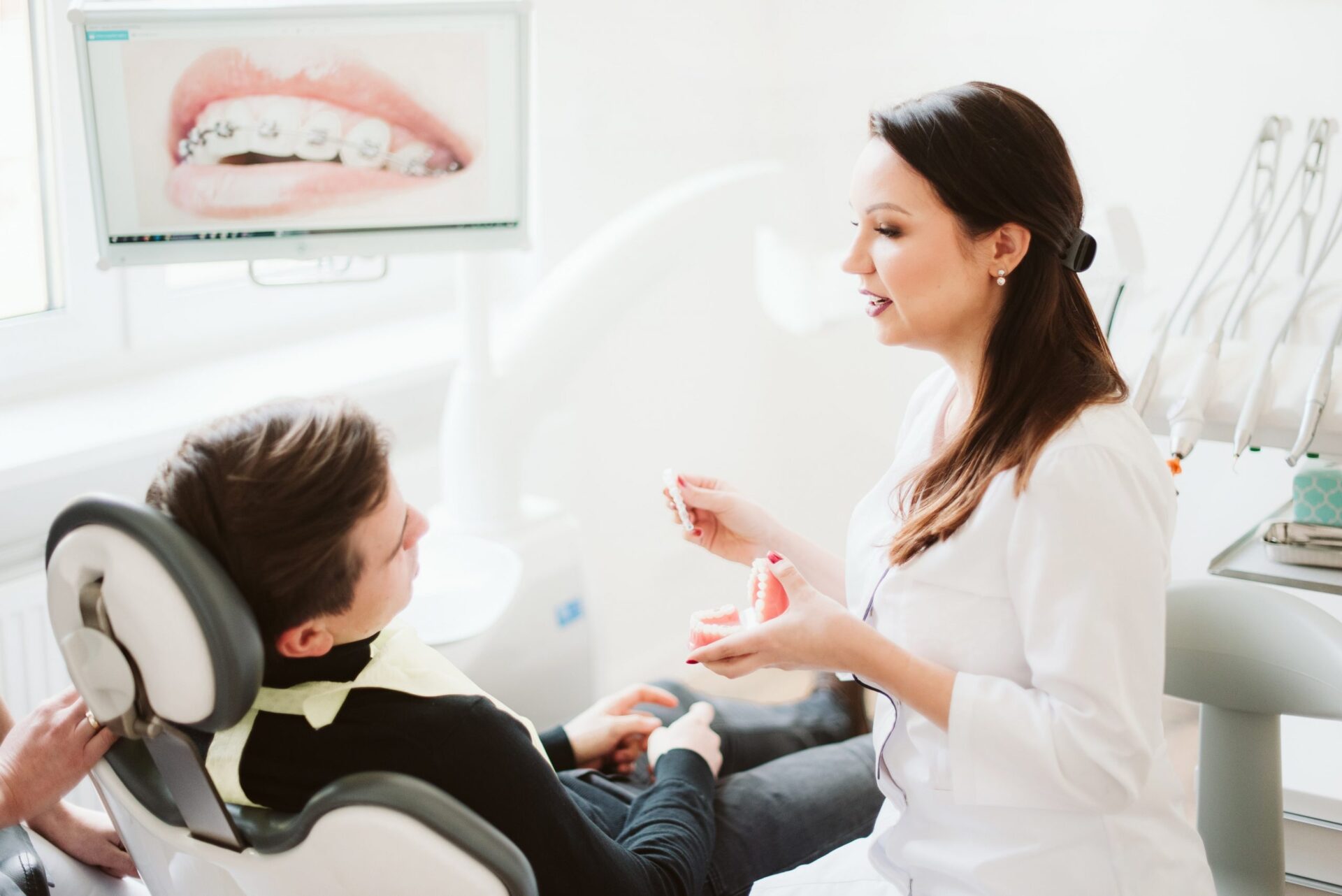 The following symptoms should indicate the need to visit an orthodontist:

- crowded teeth - teeth overlap one another and do not have enough space to fit in the alveolar process.

- teeth gaps - there are gaps or spaces between teeth, which may result from missing teeth or anatomy.

- open bite - there is no contact between upper and lower teeth (they don't touch when the mouth is closed).

- crossbite - involves a reverse overlap of teeth (in that case, the lower teeth overlap the upper teeth).

- deep bite - a type of vertical malocclusion where the upper teeth excessively overlap the lower teeth.

What does orthodontic treatment involve?

Orthodontic treatment aims to obtain an "ideal" smile with the use of dental braces. There are many types of them. These include fixed and removable braces, used to change teeth alignment. There are also braces designed for muscle exercise or ones that affect jaw growth. The role of a brace is to constantly and gently pressure teeth and jaws. The choice and effectiveness of a given method depend on the severity of the defect in a patient. 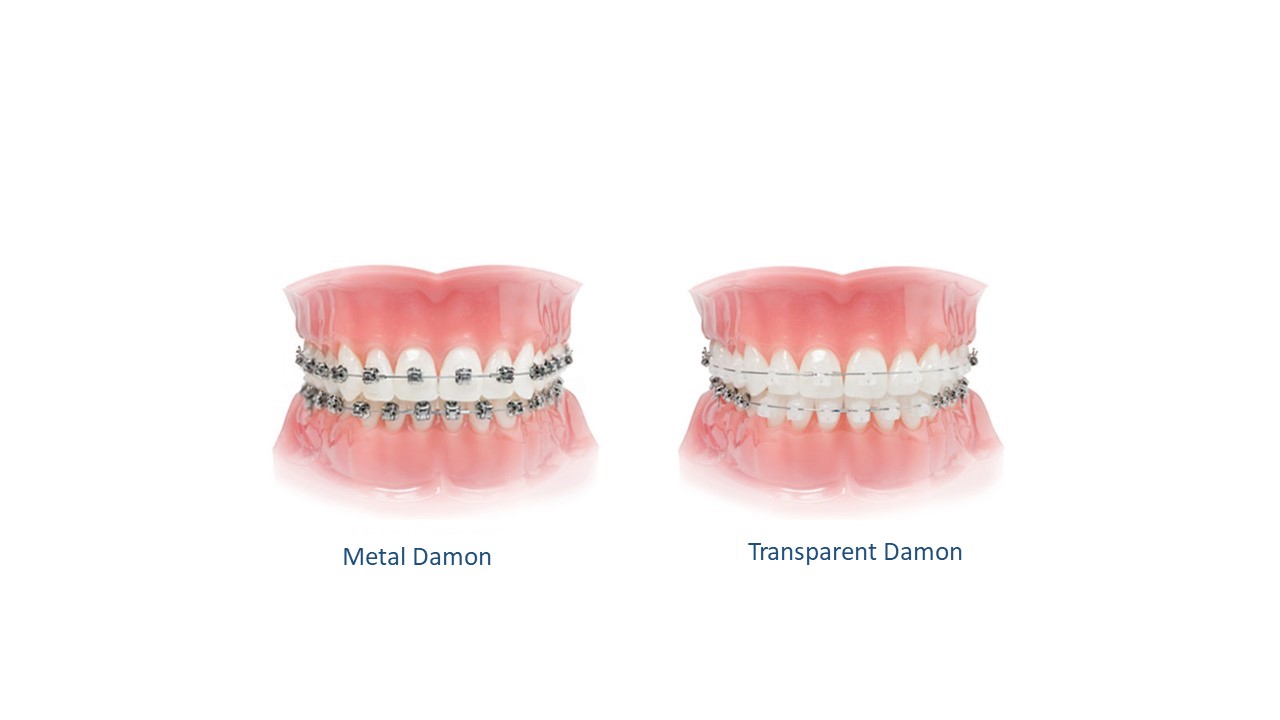 These are the classic braces that are most commonly used in treatment and consist of bands, arch wires and brackets. Bands are fitted around the teeth and provide a sort of anchor to the brace. Brackets, however, are glued to the front surfaces of the teeth. Arch wires pass through the brackets and then are fastened to the bands. Tightening the arches puts pressure on teeth and leads to their controlled and gradual shifting to the desired position. The brackets are typically adjusted once in a month. How long does such orthodontic treatment take? From a few months to 2-3 years. It all depends on various factors, such as age, degree of malocclusion etc.

Aligners are an alternative to traditional fixed braces for adults. There are no brackets and wires here. They can be freely removed (e.g. when eating) and inserted. These are transparent overlays that are easy to keep clean. Though they can be removed at any time, they are worn almost constantly and thus classified as fixed braces.

Space maintainers, which are used when a baby loses a baby tooth too early. Such apparatus can be both fixed and removable.

Removable braces are ones which the patient can remove at any time. Their effectiveness is limited, as they allow to correct minor misalignments as well as to widen the maxilla or mandible in the case of narrowed arches. Removable braces are worn several hours a day, as recommended by the dentist. The effectiveness of treatment with such a brace depends mostly on the cooperation between the patient and the doctor.

There are also special braces, used to eliminate bad habits, such as thumb sucking or pushing the teeth with the tongue. Unfortunately, they are quite uncomfortable - especially when eating - and they should always be used as a last resort.

Space maintainers work in the same way as their fixed counterparts. They are made of an acrylic tray that corresponds to the patient's jaw and plastic or wire elements, which are placed between teeth. Their aim is to maintain the space between teeth.

Orthodontic rubber bands, also called elastics. They are attached to braces on the upper or lower jaw and help to properly align the jawbones.

The muscles of the lips and cheeks can pressure the teeth. Lip bumpers help to reduce its force.

A palatal expander is an appliance used to widen the upper jaw. It is placed on the palate and fits the vault of the mouth. The outward pressure applied on the plate by the screws forces the joints in the bones of the palate to open longitudinally, thus widening the palatal surface.

Retainers enable the teeth, gums and jaws to adapt to the new and proper alignment, preventing regressing to misalignment. Retainers can be both fixed and removable.

Invisalign. A clear aligner that you insert and remove whenever you want! 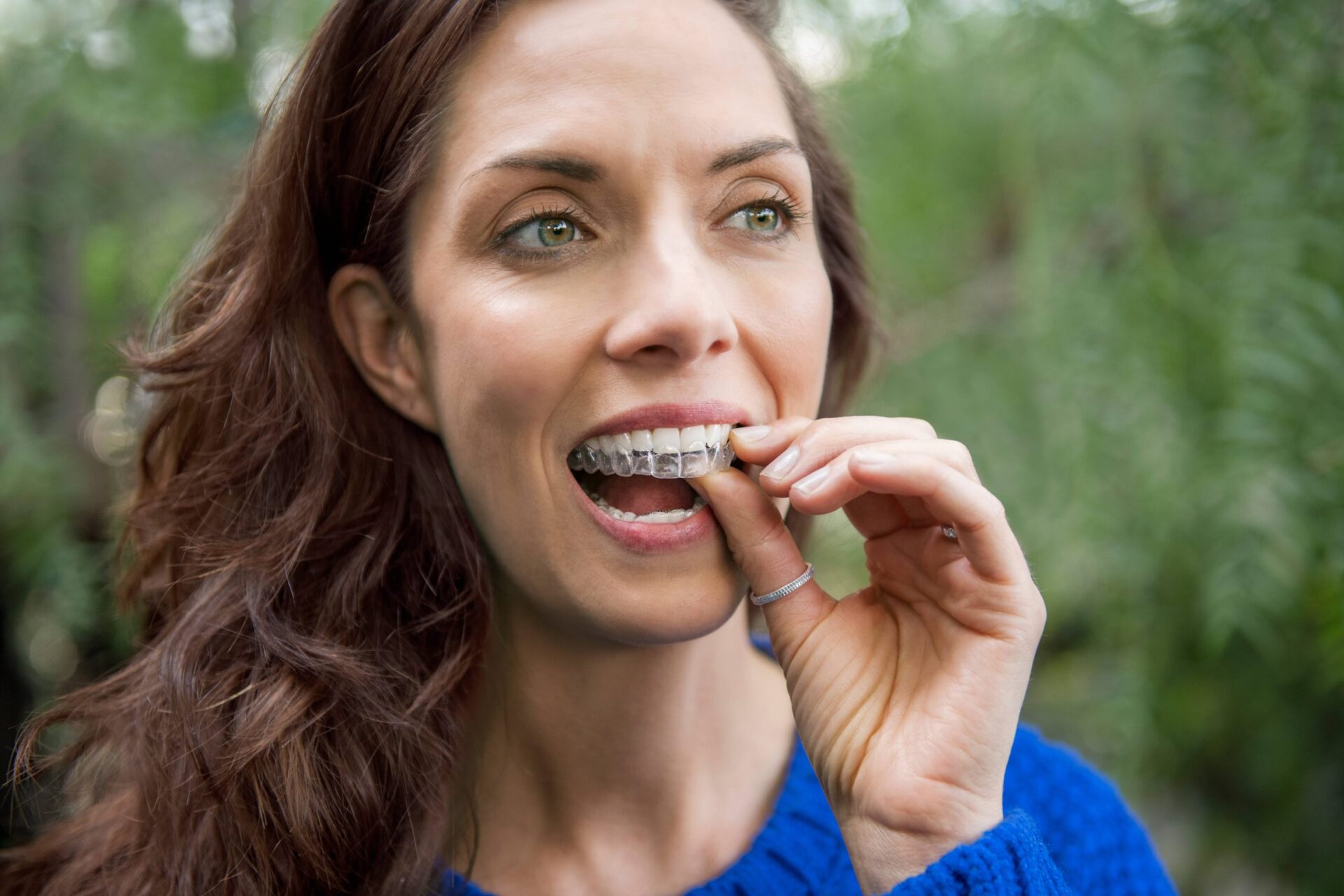 An Invisalign treatment is an almost invisible way of teeth straightening. Using advanced 3D computer imaging technology, an Invisalign doctor presents a comprehensive treatment plan to a patient based on their recommendations - from the initial alignment of the teeth to the desired alignment after treatment. Then, a set of customised transparent trays is created. The role of these trays is to gradually move the teeth. Each tray is worn for approximately two weeks. Then it is replaced with the next tray from the set, which further gradually moves the teeth to the planned alignment. The length of treatment depends on the patient's specific needs and is determined by the Invisalign doctor.

How does Invisalign work?

The role of Invisalign aligners is to move the teeth gradually. As opposed to traditional braces, in the Invisalign treatment not only is the scope of tooth movement by every tray controlled but also how long does it take. Due to that, on each step of the treatment, only the chosen teeth can be moved in accordance with the Invisalign treatment plan for a given phase. It allows one to effectively straighten the teeth.

How much does Invisalign treatment cost?

How to start Invisalign treatment?

To start the treatment, make an appointment with an Invisalign doctor.

How long does Invisalign treatment take?

The length of treatment depends on how complex the case is and is usually shorter or similar to the treatment with a traditional brace. The Invisalign doctor will give you more details during the consultation.

See the treatment process before it starts

Every Invisalign patient can find out how the smile will look like even before starting the treatment. It is possible due to the ClinCheck® technology, which allows us to obtain a digital map of the whole Invisalign treatment. An Invisalign doctor prepares a precise and customised treatment plan which includes the scope of teeth movement and the amount of time needed to obtain the final result.

If a beautiful smile is the aim, precision and predictability are substantial to the patient's comfort and the treatment's effectiveness. Invisalign clear aligners are made of SmartTrack material which ensures an increase in the overall predictability of tooth movement by over 75%. Each change of aligners is a small step in the road to a big makeover which results from comfortable and effective movement of teeth to their final alignment. And if the Invisalign doctor will allow the patient to change the trays weekly instead of once in two weeks, a prettier smile can be achieved in as little as 3 months, which is up to 50% faster than before.

Each innovative feature of the Invisalign system serves one purpose - to achieve the smile of your dreams. Because of that, millions of people worldwide chose removable, almost invisible aligners, thus changing their lives. The trays, custom-made for the patient's teeth, gradually move the teeth. Each little movement brings you closer to the new smile - effectively, gently and precisely.